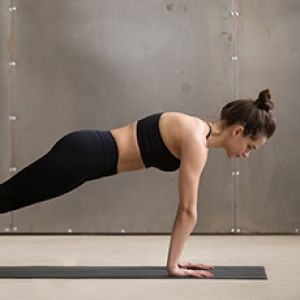 Pose of the Month: The Half Series

Taking the time to break down Half Series will help you guide your students safely and properly so they can experience the strength and stability it provides.

Nothing epitomizes a Flow Class quite like Half Series—the Vinyasa we do between Warrior, and other standing pose sequences, in Mountain 2 of a YogaFit class. It’s common to include as few as one or two and as many as seven or more vinyasa in a single class. The Half Series helps build upper body strength, increases inner body heat, and provides a nice reset button in between more challenging poses.

Often your students will want to bypass Kneeling Half Series and get right into the full Plank version right away. Discourage that. Remind them that the Kneeling variation offers benefits that aren’t available in the full Plank one. Also, many students find they gain more from completing Half Series with the knees down for most, or even all, of the time. Let’s break down the poses and see how we can best guide our students through Half Series so they can experience the strength and stability it provides.

Main Elements of Half Series

Avoiding peaking and sagging of the hips

Keeping head in line with spine in Plank and Crocodile

Preparation and Kneeling Half Series

Start class with the Standing or Supine Warm-Up. During the Warm-Up, explore Kneeling Half Series.

1.  Bring the students attention to the length in their spine as well as the balance between protraction and retraction in the shoulders, finding that place where the shoulder girdle feels strong and stable.

2.  Ask them to check in with the alignment of their head and neck in relation to their spine. They should feel a straight line from the crown of their head to their tailbone. Look for shoulders to be stacked over wrists.

Challenge: Many students will pull too far forward, placing shoulders over fingertips (or beyond), in an attempt to create a straight line from head to knees, which causes unnecessary strain on the wrists. Remind them that this is not what we’re looking for. The pose for some students will almost look like All Fours; for others it will have more of an angle to the knees.

3. To show the correct alignment, encourage students to move into Kneeling Plank from an Extended Child’s Pose, keeping shoulders over wrists. If appropriate for your group, move back and forth from Child’s to Kneeling Plank a few times to establish the movement.

When students are ready, add in Crocodile pose by shifting the weight slightly more forward and cueing as follows:

1. Now, the head of the shoulders should come past the wrists

2. Hugging the elbows in toward the ribs, lower towards the floor, either an inch or two, or all the way down to a 90 degree angle at the elbows.

3. The elbows continue to be stacked over wrists and the upper arm should be no lower than parallel to the floor.

Challenge: Many students think they should drop all the way down and hover an inch off the floor. Remind them that this is not what we’re looking for. Allowing the head of the shoulders to drop below the level of the elbows presents a high risk of injury over time.

Depending on your class, either moving into Cobra at this time or waiting until Sun Salutations to add it in. I often find that students get so fixated on the Cobra/Updog part that they shlump through Crocodile and never learn to stabilize there. So, I leave Cobra out the first few times to emphasize the work in Crocodile.

From Crocodile, cueing students to simply press back into Child’s Pose. If you do introduce it, from Crocodile, have students release their hips and then the rest of the body to the floor—instead of lowering down and putting tension in the shoulders. From there, lifting head and chest away from the floor while drawing shoulders back and down away from the ears. Finally, cueing students to press back into Child’s Pose.

After focusing on the Kneeling Half Series in the Warm Up, complete at least the first two rounds of Sun Salutations with the knees down as well—to reinforce the work they’ve just done. Then, offer the option to complete the Sun Salutations with knees lifted. To help those who feel ready to move into Full Plank, here’s the breakdown.

2. Head in line with spine—a straight line from the crown of the head all the way to the heels

5. Weight pressing back into the balls of the feet

To move into Crocodile Pose, shift slightly forward onto the toes, allowing shoulders to come towards fingertips, hugging elbows into the ribs and lowering towards the floor. Again, students can lower down a tiny bit—just an inch or two—or go low enough to create a 90-degree bend in the elbows. Reminder: we want to see elbows over wrists here, just like in the Kneeling variation, and the upper arms no lower than parallel to the floor.

Now, here’s the challenging part: While holding Crocodile Pose, cue students to flip their feet over so toes are pointing to the back of the mat and they are on the tops of their feet—where their shoelaces would be—pressing into the arms to lift into Upward Facing Dog, reaching the sternum forward and drawing the shoulders back and away from the ears. Floating the hips and knees off of the floor. Upward Facing Dog is a backbend, so encourage students to feel the upper spine extending and lifting forward.

Finally, flipping the feet back over press back into Downward Facing Dog and complete the rest of the Sun Salutations.

After spending this time with students guiding them into their strongest Half Series, offer opportunities throughout class to practice whichever variation they choose.

Using a bolster can help reinforce the proper alignment for Crocodile Pose. Ideally, we want something as tall as our forearms and long enough to support our whole body in the pose. Some bolsters are thick enough and firm enough to do that. Otherwise, you can use blocks or a combination of blocks and blankets to create a bolster that is the perfect height for you. Once you have your props, place them so they are under your body in Plank Pose.

Shift forward and begin to lower towards the floor. The props should guide you to land in the perfect alignment! If available, look in the mirror to see if everything is lined up like it should be. Look for elbows over wrists, upper arms parallel to the floor, a straight line from head to heels, and head in line with the spine.

Taking the time to really break down the Half Series can be a very rewarding experience! I’d love to hear from you—what do you think is the most challenging aspect of doing or teaching the Half Series? Let me know in the comments below! 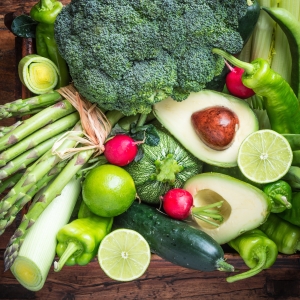 7 Lucky Recipes to Help You Get Your Green On!