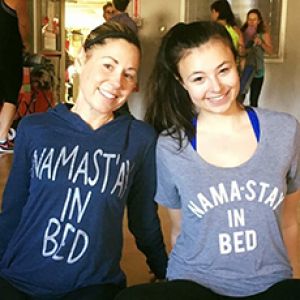 Get Inspired: An Unexpected Gift

Chrissy Mistretta, a mother of three daughters, has been on her YogaFit journey since December 2011. “My oldest daughter, Miranda, has some special needs,” says Chrissy, “Ever since she was very young, we’ve used relaxation techniques such as breathing and Reiki to comfort her.” When Miranda turned 15 years old, Chrissy took her to her first yoga class—and she loved it. She began taking classes as often as she could at the local Woman's gym where Chrissy taught. “She would walk into a class completely frustrated with herself and stressed from her challenges and walk out a different kid!” Chrissy remembers. “It really has a wonderfully blissful effect on her. And now, almost four years later, she considers herself a true yogi.”

Last summer, Chrissy took her Level Five training in Manchester, New Hampshire, with Aimee Marshall. During the weekend she met a mother/daughter duo who had embarked on their 200-hour journey together. Chrissy could barely contain her excitement! She went right up to her daughter and said, “Think how much we fun we could have doing ours together as well!” Unfortunately, Chrissy realized she had already finished most of her training. But then it dawned on her. “I had this ah-ha moment! I realized I still needed to do my Level One retrain, which for some reason I had left until the very end. And now I knew—this was the reason why!”

In early December, Chrissy headed back up to Manchester to take the Yoga Back and Anatomy trainings with Aimee. She saw them the moment she walked into the room—the same mother/daughter team! “I couldn’t wait to tell them what an inspiration they had been to me and how I was planning to bring my daughter with me to my Level One retrain in February.”  A few hours later that they approached Chrissy and said they, too, had had an ah-ha moment. They told Chrissy that Kayla, (the daughter) had won a free Level One at the MBF almost exactly a year ago and had been holding onto it for the right fit. “As soon as she heard my story,” Chrissy says, “she said she knew that's where it belonged!”

As Chrissy finishes her story, she says something that will resonate with so many of us in the YogaFit community. “It never ceases to amaze me how things fall into perfect alignment when we are on the correct path. And sometimes it just hits you smack dab in the face!  YogaFit has been one of the most fulfilling journeys of my life, and opened doors to many magical things.  Beyond all the knowledge I have gained are the gorgeous spirits I have encountered and the friendships that I have been blessed with.” Amen to that, Chrissy. 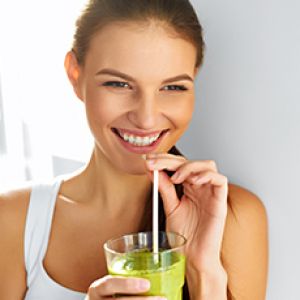 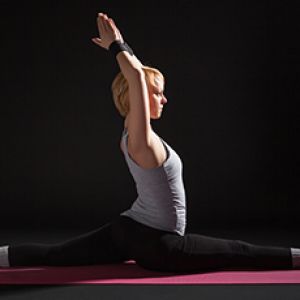 POSE OF THE MONTH: Full Splits